Sooo... I apparently missed the end of October and the entire month of November. Oops. I thought of updating the blog a few times, but I either didn't have much to say or had too much to say and didn't know where to start. I'm supposed to be napping right now, but I'm way too itchy (more on that in a minute), and Logan has the hiccups... again. So here we are. There is no telling how long this will be or what all will be covered, so feel free to skip as you see fit. :)
The main item that should be discussed, I guess, is the pregnancy. I am currently at 31 weeks, 4 days--crazy! It has been a rough few weeks, and I finally got to see a specialist in Little Rock this morning. I started having severe itching all over my body the week before Thanksgiving. It is the worst in my hands and feet, and it just spreads to the rest of my body from there. A little itching is normal with pregnancy, but this is keeping me from sleeping! I average between 3 to 5 hours of sleep at night, but that is never all in one clump--hence the need for a nap right now. :) When I first started talking with my OB about it, we tried antihistamines and topical creams--no good. The more we talked, the more convinced he was that I might have developed Cholestasis of Pregnancy--a rare, pregnancy induced liver disease that causes severe itching. Feel free to click the link for more info. He has only seen 6 or 7 cases of this in his entire career, so he wasn't really sure what to do with me. The first blood test we did was negative, but apparently that can happen and you still have the disease. After a lot of aggravation and phone calls, I was finally referred to a perinatologist at Baptist Hospital in Little Rock. We just had that appointment this morning, and he is fairly convinced that I do have Cholestasis. We drew more blood (results to come later this week), and I am starting a medication that is supposed to break down the bile so the bile acids aren't overflowing into my blood stream, which is also supposed to reduce the severity of the itching. PLEASE pray that this works! I'm about to crawl out of my skin! The good news is that we also got to do a very thorough ultrasound and check out all of Logan's major systems--he is growing right on schedule and is very healthy. I'm just so thankful that none of this is affecting him so far! The bottom line: the only cure for this is to deliver the baby, and if you wait too long, it can become harmful to the baby. Since we don't want this affecting him, we will probably be having him around 36 or 37 weeks (between January 6-13) as long as there are no further complications. We'll be monitoring my bile acid levels through blood tests every week, and I'll just keep taking this medication until he is born. Whew! That was a lot of info. Congrats if you made it through all of that. :) Moving on...
I delivered a TON of coasters to Davis-Kidd Booksellers in Memphis at the end of October, which was great!... until their corporate office filed for bankruptcy a couple of weeks later. So where is my $400+ that I was supposed to receive for that order?? I might never see it. Not cool. I've been told that I might receive a partial payment after the courts get done sorting everything out, but that will be a while down the road. The store in Memphis is actually the only one staying open, but since my invoice went to corporate, there's not much they can do. Just thought I'd take a moment to whine about that. Next...
Casey is still enjoying his job at the pediatric office. He's basically the scheduling/medical records/IT guy for the office. They have been having a lot of computer issues lately, and he is always the one they turn to when they need something fixed. There is also an office nearby that was set up by the same doctor, and they have been asking for his computer assistance there, too. There has been talk between the bosses of having him do a "side job" of cleaning and reinstalling software for a lot of their computers, so that could be some extra money. It's just nice to see him being appreciated and being allowed to use the talents he has.
Since I missed a couple of major holidays, I guess I should throw in some pictures and comments on those. Abby wore a couple of different costumes for Halloween, so we have multiple pictures of that. For one party, she was Sleeping Beauty... until that costume made her break out in hives. Oops. But wasn't she cute?? 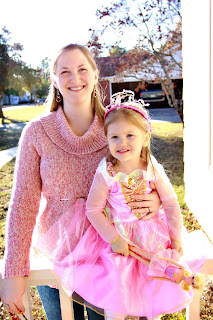 After getting rid of that dress and administering a healthy dose of Benadryl, she decided to be Fancy Nancy for the other Halloween party. Again, with the cuteness (complete with red Koolaid mustache): 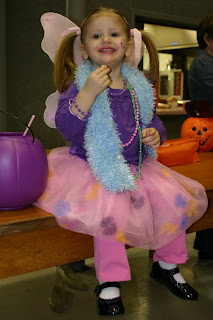 Other fall-ish events that took place included pumpkin carving, riding a horse that belongs to one of Casey's co-workers, playing in the leaves, and face painting at a carnival. 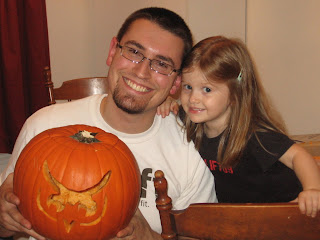 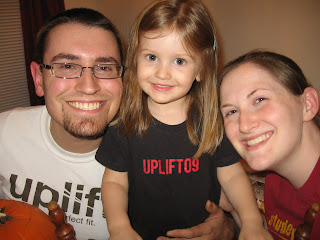 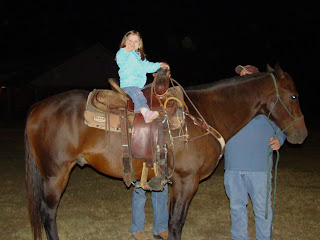 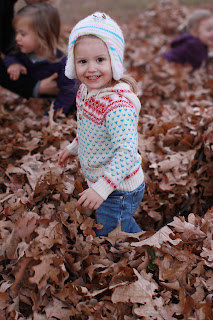 When asked if she wanted a heart or a butterfly on her face, Abby said, "I need a black spider on my face!" Naturally. :) 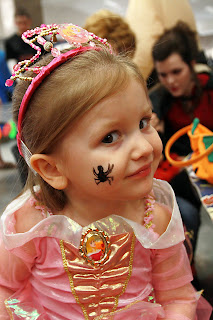 November was fairly uneventful until the end. There are a few cute Abby pictures to share, but that's about it until Thanksgiving. 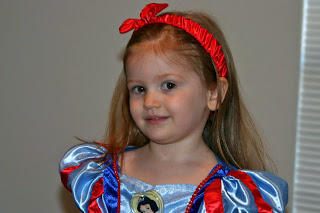 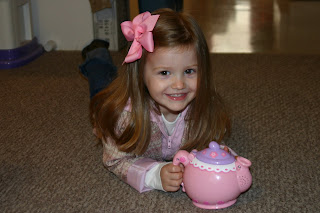 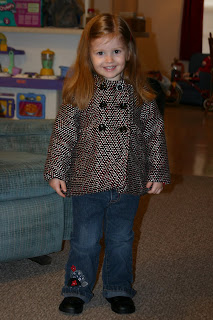 I am happy to report that Uncle Peter has been trained to continue the tradition of the "Magic Mushroom" at Uncle Wayne and Aunt Helen's house. This is something my Uncle Russ used to do with us when we were kids, and it basically consists of flying each kid around the house on a stool while making appropriate "blast off" related sound effects. Sadly, the original Magic Mushroom is no longer with us (think: orange, velour mushroom-shaped stool from the 60s or 70s), but it's spirit lives on. I'm pretty sure Abby could've done this all day. Sorry, Uncle Peter. :) 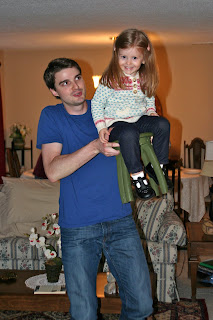 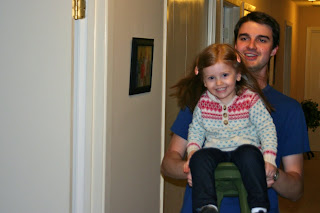 Random funny story #1: Abby found my old flip phone the other day and started playing with it. When I asked her what she was doing, I assumed she'd say something like, "Calling Nana!" Instead, she replied, "I'm checking my email!" Good grief.
Random funny story #2: Nana has a child size desk at her house that she got down for Abby to sit and color in. She was ready with crayons and coloring books for Abby when she sat in it for the first time, but when Abby saw it and sat down, she said, "I need my computer, pwease!" I told Mom at least she didn't ask for an iPad. :)
So we're just about caught up. Congrats to anyone who made it through this entire post. :) Our Christmas tree is up, the apartment is decorated, and we listen to Christmas music every chance we get! My goal right now is to stay as healthy as possible through the end of the year, enjoy Christmas with my family, and get the apartment ready for Logan's arrival! Do you think I can update again before the end of the year?? ;)

Ooooh, I loved this newsy blog post! And, yes, I read every word!!

So sorry about your itching. I sure hope that gets figured out very soon.

The picture of Abby in the leaves looks like something from a magazine. She is so beautiful.

I also read every word! Good update, Rachel. I'm so sorry about all the itching and hope that this new medicine can keep it under control until Logan arrives. Abby is so adorable in her princess gear. Thanks for sharing those cute pictures.

I already knew all that stuff but it was still fun to read about it. :) Good update! Lots of people over here praying for you.