Abby is still only 10 months old, but somehow it would appear that we have already moved on to the toddler stage. I thought she would be at least a year old before we dealt with this stuff! Here are her latest accomplishments:

Oh, and let's not forget about this: 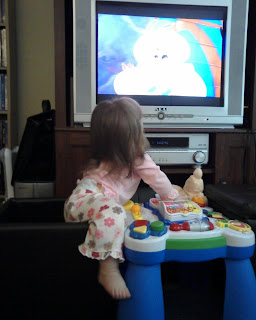 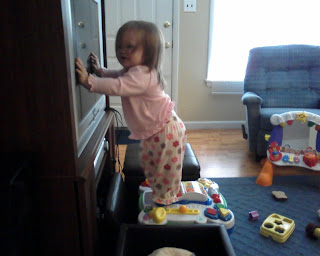 What. A. Mess. Please observe that she got herself into the ottoman cube first before climbing up onto the toy table. The girl is into everything!

Although, I guess no matter how big she gets, I'll still feel like this: 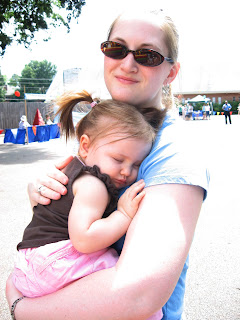 I was going to be in bed by 10:30 tonight, but as I was about to shut down the computer, I saw Abby's baby calendar... which I haven't been filling out.... at all. I was struck with sudden guilt and decided I had to get it up-to-date before I forgot everything she has done in the past few months! (Yes, months--I was that far behind.) Luckily, I blogged about some of her accomplishments and adventures over that span of time so I was able to put some of that on her calendar. That combined with the millions of pictures we have taken might have saved me. The calendar is now up to speed! And now for the latest entry on Abby's calendar....

She's walking! Can you believe it?! We have been counting her (independent) steps lately, and the highest she had gotten to was four. On Monday night, she had to go to work with me because Casey was working, too, and apparently she decided that was her moment to take off. I saw that she was going to take a few steps, so I started counting.... all the way up to 18! After that, it was all over. She just walks around all over the place now! She will drop back to her knees and crawl if she's really in a hurry to get somewhere, but she's much more confident with her walking now.

My baby will be 10 months in just a couple of days, and she's already walking around the house! I think I'm still in shock. :) We haven't had the video camera around when she's been walking yet, but we will get video soon.

In other Abby news, she has started looking like a little vampire (or hillbilly... we're not sure which). She has gotten two teeth on top now, but they're both of the side teeth! We have yet to see any sign of the front two teeth on top. It looks a little odd, but I have been assured by 2 different dental hygienists that it is nothing to worry about. Here's our little walking vampire: 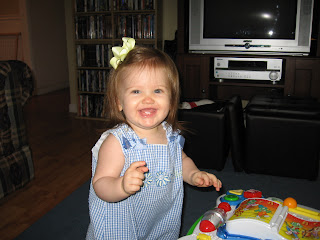 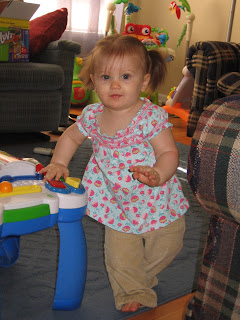