Well, it's been a long time coming, but I'm finally starting my own business... sort of. :) I have an online website to sell my coasters, and I've added a link on the side of this page if you'd like to check it out. Christmas is coming, so tell your friends and family:

I have several new stamps that I'm anxious to try out, so check back often for new designs! I'm really excited to get this going, and I hope it all works out. Let me know what you think! (Or even better, place an order!) :)

For those who don't have Facebook, I put together a slide show of my favorite pictures from when we took Abby to pick out her first pumpkin this weekend. Mom and Dad were in town, so it was a fun family day!

Kim has this on her blog, and it looks like fun. I believe the concept is to take the first picture of the first folder on your computer, the second from the second folder, etc. up to 10. This should be interesting... :)

First from the first: 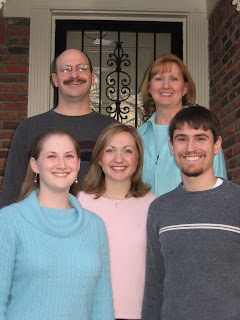 This is from January 2006 (or was it 2007?) right after Christmas. We wanted to take some family pictures, and believe it or not, we did not plan the color scheme. :)

Second from the second: 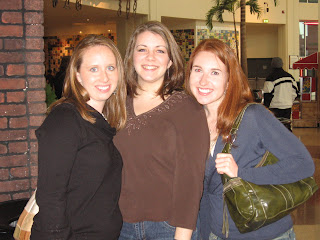 These are 3 of my 4 HU Posse girls: (from the left) Lindsey, Melissa, and Jessica. We had a great weekend together in Memphis in January 2007.

Third from the third: 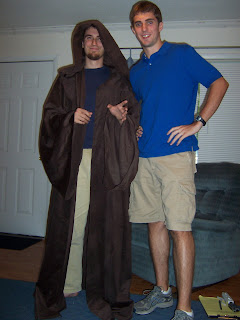 In July of 2007, Casey's friend, Tyler, came back from teaching English in China to visit us. His gift to Casey was a Jedi robe made from material he bought in China. Yes, Casey does wear this around the house when it's cold in the winter. :)

Fourth from the fourth: 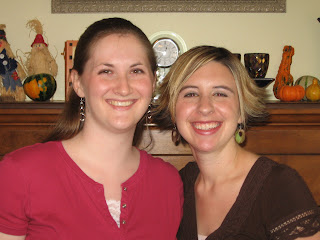 This is my other HU Posse girl, Sara. I went to visit her and her husband at their house in Alabama in October of 2007.

Fifth from the fifth: 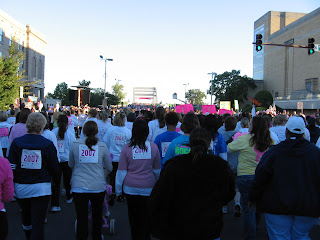 Also in October of 2007 was the Race for the Cure in Little Rock. This was my first time to do it, and I was amazed at how many people were there!

Sixth from the sixth: 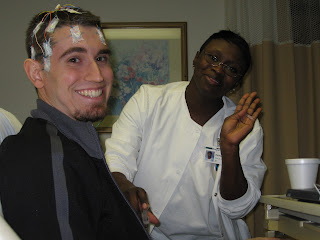 Apparently, October of 2007 was a busy month. This is Casey in the Seizure Investigation Unit at Baptist Hospital in Little Rock. His first nurse, Phyllis was SO sweet! It was a long week, but doesn't he look great?? :)

Seventh from the seventh: 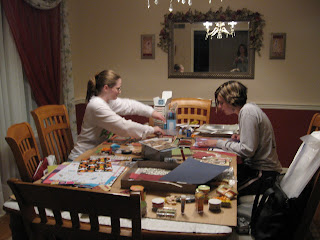 Sara is also my stamping/scrapbooking friend. We got together for a weekend in November of 2007 at Mom and Dad's house to work on scrapbooks we were making for Christmas presents. She made one for her grandparents, and mine was for Tara. It was a mess, but we had a blast!

Eighth from the eighth: 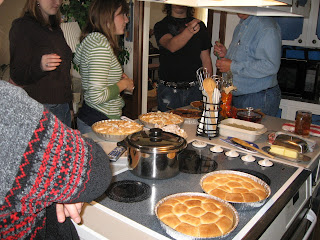 Thanksgiving in Heber Springs, November of 2007. I think I ate a ton of those rolls to make up for the ham that made me feel sick. Little did I know, I was pregnant at that time!

Ninth from the ninth: 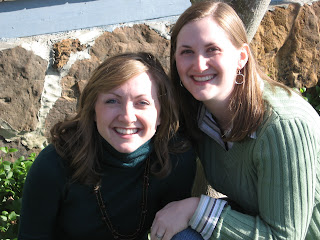 More family pictures being taken, this time out at Mamaw and Papaw's farm in November 2007. Yay for sisters! :)

And finally, Tenth from the tenth: 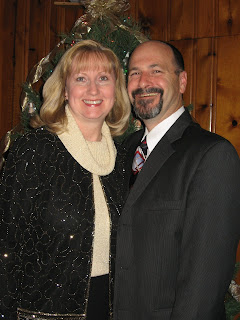 These are my BEAUTIFUL parents! This was this past Christmas (2007) right before going to a Pfizer, Inc. Christmas party. Don't they look amazing?? I think this is one of my favorites of them together.

Ok, that took quite a bit of time, but it was fun! Thanks for the idea, Kim. I needed something to do while Abby was sleeping other than clean. :) Feel free to do this on your blog, too!

Apparently Deborah has "nominated" me to do this tag thing, and I actually have a moment to do it! Work is over, I'm finally eating dinner, and Abby is asleep. Yay!

To accept this nomination, I have to answer the following questions with one word answers (this could be difficult :)) and nominate 10 other blogs for the "I heart your blog" award. Here goes...

Okay, here are my 10 nominees:

Well, I hate that I wasn't home for this, but at least Casey took a few pictures. Abby pushed up on her hands today! She's been lifting up on her forearms for a couple of weeks now, but Casey said she got up on her hands and pushed herself up. She has also been rolling over from her tummy to her back for a couple of weeks now. She doesn't do it all the time, but it's funny to watch her face when it happens. Between that and the scooting across the floor with her legs, I really have to keep my eye on her! I predict crawling by Thanksgiving and walking by Christmas. :) I'm thinking we might have a future athlete/gymnast/ballerina on our hands with muscles like these! Or as the grandmothers both like to say, "She's so advanced!" Ok, so maybe they're a little biased...

Here's the best picture Casey got of the momentous event (thanks, honey!): 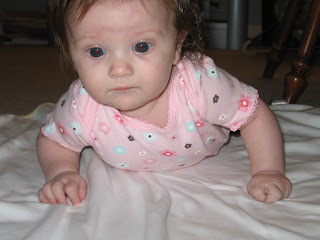 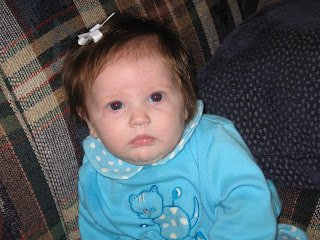 I'm a little behind on blogging, but we've been busy! Here are a few recent events in pictures:

Abby showed Daddy that she can take him down in a staring contest. 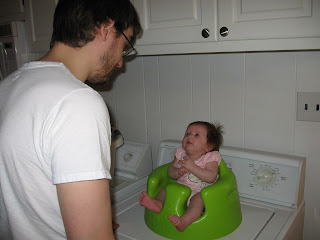 We tried sitting up in the high chair for the first time. 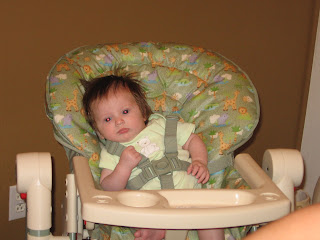 "Aunt" Sara came to visit for a few days. 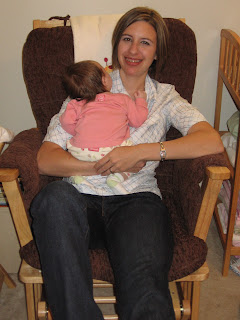 ***Additional story: Sara and I had a great visit while she was here, and she was so helpful with Abby. She spent the first half of her fall break hanging out with us--I miss her so much! Sad part--our last night to hang out was Tuesday, and it was cut short because Sara had to take me to the ER. Didn't you think we were all done with those pesky ovarian cysts rupturing?? I know I did. Apparently not. They didn't find any more, though, so hopefully we're done with that again. Other than the excruciating pain, the ER visit, and being doped up on pain pills into the next morning, we had a really great night out while Casey stayed home with Abby. (Thanks, honey!) Moving on...
Grandma Rhonda and Grandpa Terry came to visit (it was the first time Abby got to meet Grandpa Terry!) 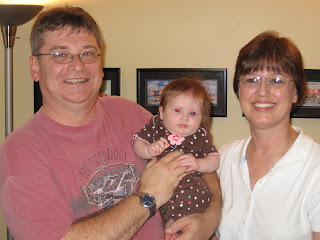 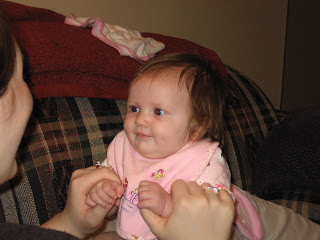 Then we took a quick trip over to Memphis to visit Nana and Grandpa Curtis. Here's our big girl taking a bath in the sink--no baby bathtub (won't be doing that again for a while)! :) 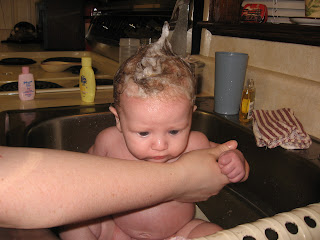 Nana decided to experiment with the video on her digital camera, and this is what we ended up with:

Growing up is hard work! Here she was at 3 weeks: 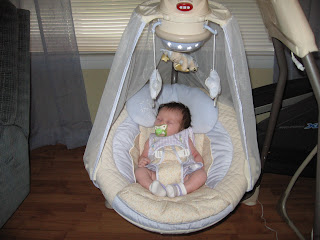 And now at 2 months! 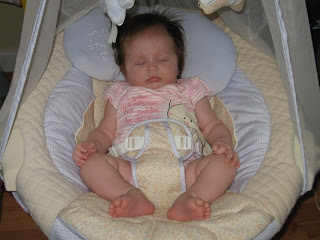 It's going by so fast, and I am trying to savor every minute of it. She's really starting to smile and laugh a lot, which is so much fun. Who knew I could be so funny?? :) She is trying to lift up on her arms when she's on her tummy, she could scoot across the room with her legs if I'd let her, and she'd rather be standing than sitting or laying down. Her eyes are always focused on something, and she could beat anyone at a staring contest. Music almost always calms her down, and her favorite Veggie Tales song is "Think of Me."

Uh oh--I think nap time must be over. Stay tuned for more on the exciting life of Abby! :)